A Block Definition Diagram (BDD) is used as a focus Parsing Analysis Diagram (PAD) for:
Wikipedia: '"The quick brown fox jumps over the lazy dog" ...'
The diagram employs this modelling trick:
Webel Parsing Analysis: If the dashed-line "anchors" from your «snippet» ElementGroup symbols to elicited elements make a «pa» Parsing Analysis Diagram (PAD) too hard to read, try making them light grey using symbol properties.
Always keep in mind throughout this tutorial that:
Webel Parsing Analysis «pa» diagrams are NOT intended as final presentation diagrams! They serve merely to traceably elicit model elements, which may then be shown in other (typically much tidier) presentation diagrams elsewhere. 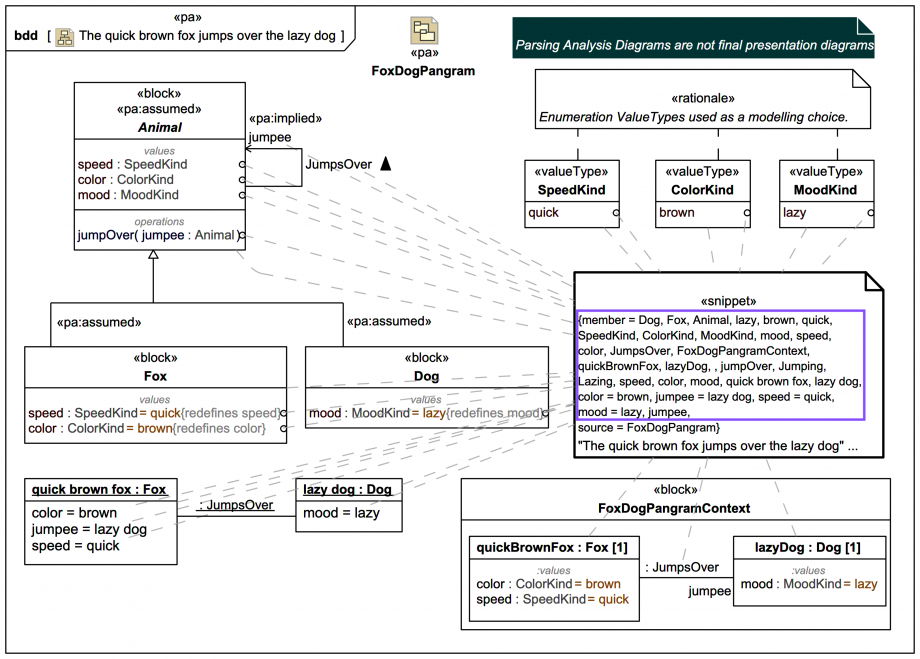 At least the following SysML Blocks can be immediately elicited from the nouns (using here a convention that the name of the first letter of a Block must be capital):

Further aspects concerning the described Fox and Dog are then considered, as shown in the PAD in Figure 4, for which a Block Definition Diagram (BDD) has been used.

We are not explicitly told what a 'dog' or 'fox' are, but the modeller may use prior knowledge about the world and the context to conclude that they are types of animal, which is indicated using the «pa:assumed» keyword on a more general abstract block Animal and thoroughly also on Generalizations from Fox and Dog to Animal. (If the application of «pa:assumed» to such Generalizations leads to diagram clutter the stereotypes keywords need not always be shown.)

It is not always clear whether «pa:assumed» or «pa:implied» should be used in such cases, the main thing is that the modeller applies at least one of those stereotypes to indicate that an additional modelling interpretation was required.

There are also Behaviors and Operations. It would seem that a Fox can jump. Can any Animal jump? Surely foxes don’t only jump over dogs. For now a more general operation is introduced, where a «pa:implied» jumpee is any animal that another animal jumps over:

There are InstanceSpecifications classified by Fox and Dog with Slot values corresponding to the described scenario:

An Association named JumpsOver is used to classify an anonymous link :JumpsOver between the instances.

Webel Parsing Analysis: An anonymous Element may be collected as a /member of a Snippet (it is not important whether collected elements list with a clear name under /member, only that they are traceably elicited).

And in a context block there are corresponding part properties (using a slightly different naming convention) with an anonymous Connector typed by the same Association JumpsOver:

Two States for a StateMachine within the abstract block Animal have also been elicited:

As StateMachine Diagrams are always owned by an element that should not eventually remain under the Source Input Zone they should not be used as PADs. Elicit States instead by adding them via the /member section of the ElementGroup specification dialog in MagicDraw.

Now some new model elements have been elicited they MUST be moved out of the Source Input Zone into the main project model area as shown next .